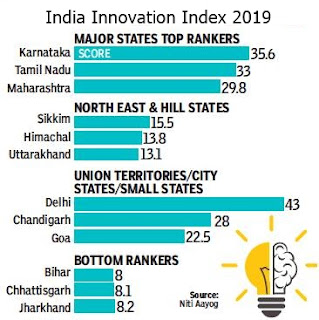 The top 10 major states are largely concentrated in southern and western India. Sikkim and Delhi take the top spots among north-eastern and hill states, and Union Territories / city states /small states respectively. Delhi, Karnataka, Maharashtra, Tamil Nadu, Telangana and Uttar Pradesh are the most efficient states in translating inputs into output, according to the report.

The index shows that the innovation ecosystem of the country is strong in the southern and western parts of India. In fact, three of the top five major states are from south India.

Delhi and Haryana seem to be exceptions to this trend and did well on the index. Thus, there seems to be a west-south and north-east divide across the country.

It is also among the top performers in infrastructure, knowledge workers, knowledge output and business environment. Among major states, Maharashtra performs the best in dimension of enablers. This implies that it has the best enabling environment for innovation, even though the state comes in at the third position in the overall innovation index.

The broad level learnings and some policy imperatives at the national level include increasing spending on research and development, and improving the capability of top rung educational institutions in the country to produce greater innovation outputs.

The Innovation Index is calculated as the average of the scores of its two dimensions — enablers and performance. Enablers are factors that underpin innovative capacities, grouped in five pillars: human capital, investment, knowledge workers, business environment, and safety and legal environment. Performance dimension captures benefits that a nation derives from inputs, divided into two pillars: knowledge output and knowledge diffusion.