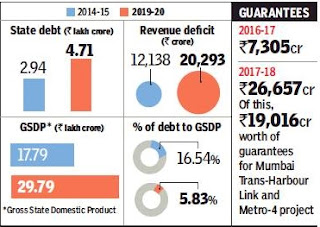 The government of chief minister Devendra Fadnavis is leaving Maharashtra with a ballooned debt burden, though the Gross State Domestic Product too has increased in the last five years, resulting in a slightly healthier debt to GSDP ratio now as compared to when his regime kicked in.

Maharashtra’s debt stood at Rs.4.7 lakh crore in June, but the picture of liabilities is incomplete without considering the guarantees it has extended. By March 2018, the state had extended Rs.26,657-crore worth of guarantees mainly on loans for infrastructure projects. Since then, the state has added guarantees amounting to Rs.17,230 crore, largely towards loans for the upcoming Mumbai-Nagpur Expressway. If all the guarantees continue without lapsing into the next year, they could cross Rs.43,000 crore.

State guarantees are contingent liabilities and pose a burden only if invoked. “Guarantees have to be considered seriously when you look at the state’s liabilities. If the entity that has taken the loan cannot repay it, then the state has to step in,” says former finance secretary Subodh Kumar. In 2016-17, the state had guaranteed loans worth Rs.7,305 crore. In 2017-18, the guarantees rose to Rs.26,657 crore. This was mainly owing to guarantees worth Rs.19,016 crore extended by the state for loans taken by MMRDA for the Mumbai Trans-Harbour Link project and Metro-4.

In August, the state guaranteed an interim loan worth Rs.4,000 crore for the Mumbai-Nagpur Expressway. A few weeks later, it guaranteed loans worth Rs.13,000 crore for the same project, overriding objections from the state finance department, which raised concerns about the impact on the state’s finances. In 2018-19, state guarantees worth Rs.230 crore were given to the Maharashtra and Vidarbha Cooperative Marketing Federations and the Shabari Adivasi Finance Development Corporation. A few cooperative sugar factories have received guarantees, including Vaidyanath factory controlled by rural development minister Pankaja Munde.

Nevertheless, state finance minister Sudhir Mungantiwar says the government has been very selective while granting guarantees. “We have extended guarantees mainly to public entities and that too mostly for infrastructure projects, which the state needs. The earlier government had guaranteed a large number of loans to cooperatives controlled by politicians,” he says.

The government has set up a guarantee redemption fund to avoid direct stress on the budget if the guarantees are invoked. So far, the fund has a budget of Rs.500 crore, sources say. During its tenure, the state government has faced several challenges on the financial front with payouts for the farm loan waiver, the implementation of the 7th Pay Commission’s recommendations and the financing of major infrastructure projects. The state’s debt has soared by Rs.1.8 lakh crore since 2014 when the Devendra Fadnavis government began its term. Indeed, at Rs.4.71 lakh crore, the state’s debt is 2.6 times what it was a decade ago.

The revenue deficit — which shows the gap between the state’s income and expenditure — is now at Rs.20,993 crore. It rose by as much as 35% over 2018-19, when the deficit was Rs.14,960 crore. However, what’s key is that the debt to GSDP (Gross State Domestic Product) ratio has remained within fiscal limits, says Mungantiwar. “Debt cannot be seen in isolation. Debt has grown, but so has GSDP. In fact, the ratio is within limits and has even improved,” said Mungantiwar. The 14th Finance Commission had laid down that debt has to be within 22.3% of GSDP. At present, the debt to GSDP ratio is 15.8%, which is lower than in 2014-15, when it was 16.5%.

The big concern now would be to fund all pre-poll sops announced by the government in its last budget and in the run-up to the polls. Newspapers had reported that in the moments before the poll code kicked in, the government took 80 cabinet decisions estimated to cost the exchequer thousands of crores.