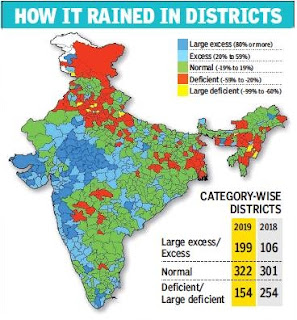 Flood fury in different parts of the country has dominated the news this rainy season as India experienced its wettest monsoon in 25 years. However, amid the rain, 154 districts—more than one in every five for which data is available —received deficient or scanty rainfall this season. These dry districts account for nearly 23% of the 678 districts for which IMD’s rainfall data is available. All but 12 of these districts are in north, east and northeast India.

The IMD defines “deficient” rainfall in a district as rainfall that is 20% to 59% below normal. Deficiency of 60% or more falls in the “scanty” or “large deficient” category. 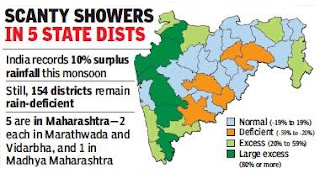 Haryana had the highest number of dry districts in the country, 19 out of 21.

The overall monsoon deficiency in Haryana was -42%, which made it the driest state in the country in the season after Manipur (-56%). Delhi had five dry districts out of six for which data was available. In fact, more than a third of the dry districts, 52, are in the high-output agriculture belt of Punjab, Haryana and west Uttar Pradesh, including Delhi. This is the region where the water table is falling alarmingly, and another season of poor rains will only add to the stress.

The high number of dry districts during a season when countrywide rainfall was 10% above normal may come as a surprise to many but not to experts familiar with the vagaries of the monsoon.

“During a normal monsoon year, around 30% of the districts in the country get deficient or scanty rainfall. This year, due to higher rainfall, that figure is closer to 20%. India is a vast country and there is much variation in rainfall at the district level,” Mrutyunjay Mohapatra, IMD’s director general of meteorology, said.

Last year, when monsoon was more than 9% below normal—close to the threshold of a drought year—there were 254 dry districts across India. These accounted for nearly 38% of all districts. This year’s number is 40% lower while rainfall was 20% higher than in 2018. “Rainfall distribution was good this year, although temporally distribution wasn’t good in east UP and Bihar. These sub divisions got heavy rainfall in the second half of September after being deficient for most of the season,” said Mohapatra.

Outside of rain-deficient districts and the havoc caused by heavy rains, this year’s monsoon should bring good news