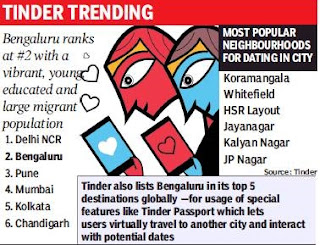 Bengaluru may soon become synonymous with online dating. According to mobile app Tinder, the city ranks as its second highest user after Delhi in India.

A Tinder study ranked Pune, Mumbai, Kolkata and Chandigarh after Bengaluru. But the study also looked at another feature — which cities are swiping right more often (or sending more requests to potential dates), and Pune tops the list. Bengaluru is at No.6 (showing the city is slightly more conservative or picky in choosing dates). Last year, Tinder became the highest paid user app in India, according to App Annie.

Tinder also lists Bengaluru in its top five destinations globally — for usage of special features like Tinder Passport which lets users virtually travel to another city in India or overseas like London, New York or Mumbai and interact with their potential dates.