Two States: The Rise of NOTA 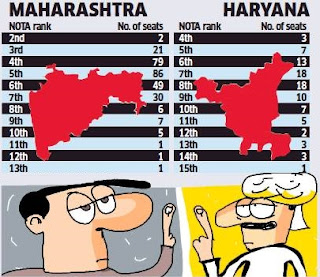 Six years after it was introduced, the ‘none of the above’ or NOTA option is beginning to increasingly count in elections in the country.

In the recent assembly election in Maharashtra, the number of voters choosing NOTA in Latur (Rural) and Palus-Kadegaon constituencies was second only to those who backed the winning candidates. In Haryana, there was one assembly seat, Thanesar, where the victory margin was less than the votes cast for NOTA.

Perhaps contrary to the general perception, NOTA found more takers in rural India than in urban areas. Latur (Rural) and Palus-Kadegaon are both rural seats. In Latur (Rural), the Congress candidate Dhiraj Deshmukh won the seat by securing around 133,000 votes. His main rival, from the Shiv Sena, got 13,335 votes while as many as 27,287 voters pressed the button for NOTA.

In Palus-Kadegaon, the Congress candidate Vishwajeet Kadam secured victory with around 171,000 votes while his nearest rival, from the Shiv Sena, got only 8,976 votes. Here, too, NOTA got 20,631 votes to occupy the second position. Apart from these two seats, in Akkalkuwa, KC Padavi of the Congress defeated the Shiv Sena by 2,096 votes while NOTA registered 4,856 votes.

In Haryana, where many seats were decided with low margins, NOTA became a factor in a few seats. In Thanesar, BJP candidate Subhash Sudha defeated Ashok Kumar of the Congress by 842 votes while NOTA secured 951 votes in the constituency.

In the Jalalpur assembly by-election in Uttar Pradesh, SP candidate Subhash Rai defeated the BSP candidate Chhaya Verma by 790 votes, a margin which was lower than the 1,055 votes secured by NOTA.