FASTags must for NH toll from 1st December 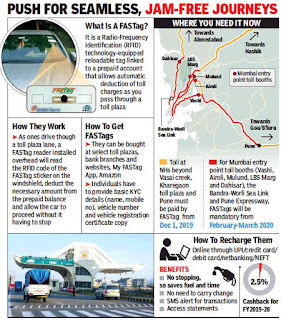 Planning to drive to Goa for Christmas? Better get a FASTag, a reloadable RFID tag linked to a pre-paid account that enables automatic deduction of toll charges as you pass the gate, since they will be mandatory at national highway toll posts from December 1.

According to a Union road transport circular earlier this year, all lanes at the NH toll plazas will turn FASTag lanes, and anybody without one has to pay double the fee. There is such a provision under the National Highways Fee (Determination of Rates and Collection) Rules, 2008, and the ministry now wants to “strictly implement” the rule.

For the citizens of Mumbai, FASTags will be a must beyond the city limits. The RFID tags will become mandatory at the Mumbai entry point toll booths (Vashi, Airoli, Mulund, LBS, Dahisar), the Banda-Worli Sea Link and the Pune Expressway only in March 2020.

State government officials explained it will take time for the state highway toll booths to join the National Highway Authority of India in making FASTag mandatory. “Though we have signed an informal agreement with NHAI to go ahead with FASTag, we need to prepare certain agreements and enable contractors with the new modalities of toll collection. Since contract terms are different at different locations and we have multiple agencies (such as MSRDC, PWD and local corporations), such a procedure for state-run toll booths will take time to evolve. We hope that two-three months after the Centre starts its system, we will be in a position to join it,” said a Mantralaya official.

This is transport minister Nitin Gadkari’s latest attempt to implement the technology for seamless travel through toll plazas. It is presently operational at 407 toll plazas across national and state highways. On Monday, the minister met with state officials to push the technology.

At the Mumbai entry points, it was started but after an initial response, interest has petered off. So, the toll booths are usually triggers for traffic jams and contribute to higher consumption of fuel and more pollution.

The MSRDC and PWD have signed an in-principle agreement with the Indian Highways Management Company, the highway traffic management arm of the surface transport ministry, to adopt the FASTag system. Preparations are underway for PWD and MSRDC to start FASTags at 73 toll booths across the state