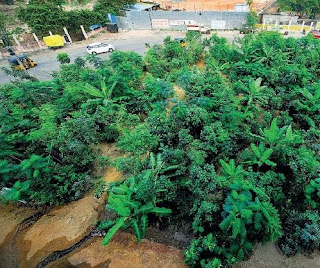 In January 2019, when the regional deputy commissioner of south zone, Chennai, Alby Jhon, decided to convert a 2,200sqm patch of corporation land into a Miyawaki forest, little did he realise that within a year it would become a movement.

Buoyed by its success and that of other such urban forests on open space reserve lands across the city, Greater Chennai Corporation has now decided to set up 1,000 Miyawaki forests to increase Chennai’s tree cover that now stands at 19%. According to the Union ministry of environment, forests and climate change, the ideal green cover for Chennai should be 33%. The corporation is inviting public and corporates to adopt OSR plots and set up such forests to improve the air quality of the area, increase biodiversity and stop illegal usage of vacant plots.

So far, 30 such forests have come up with 60,000 saplings being maintained by the civic body. Another 20 forests are being developed.

Recalling the transformation of a patch behind the Kotturpuram station, Jhon said, “Garbage was being dumped and burnt. We were getting complaints. Cleaning it and fencing it twice didn’t help. A suggestion to plant trees came up and we decided to follow the Miyawaki method which I had already done in Tuticorin.”

Corporation commissioner G Prakash has asked all RDCs, zonal officials to begin identifying land to set up the 1,000 forests. “These forests will improve the quality of air in that area and bring in birds, insects, reptiles. Also, illegal activities will stop,” he said.

The small forest also has a positive impact on the area’s micro climate. R Rajmohan, deputy conservator of forest and principal of Tamil Nadu Forestry Training College near Vaigai dam, said: “Miyawaki method not just increases tree cover quickly but also provides dense canopy cover in urban areas that helps reduce the impact of solar radiation and reduces wind velocity. Roots of these trees bind the soil and facilitates seepage of rainwater. Transpiration from these trees also create micro climate as they cool the environment. However, selection of species is vital.”

A normal sapling takes about seven to 20 years to grow, but in the Miyawaki method, closely planted native species compete with one another for sunlight, nutrition and water resulting in more vigorous growth. The sapling becomes a tree within four to 10 years, increasing the tree cover quickly.