India may have Turned Recession Corner in Q3 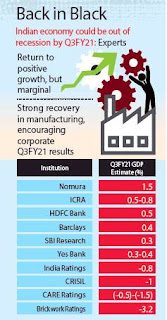 The Indian economy is likely to post modest growth in the December quarter, reversing the technical recession caused by Covid-19, following a strong recovery towards the end of calendar 2020. An ET survey of economists estimated a median of 0.32% growth in the third quarter of FY21, marking a bounceback from the previous two quarters of contraction in gross domestic product. The National Statistical Office will release official GDP estimates for the third quarter of FY21 at the end of the month.

India’s GDP contracted 23.9% in the June quarter following what was regarded as the strictest lockdown in the world that was imposed on March 25 to contain the coronavirus spread. In the September quarter, GDP shrank 7.5%.

“India will most likely see a positive growth return in Q3FY21, as the inventory trade cycle pushed up manufacturing, and services also saw a gradual return to normalcy,” said Rahul Bajoria, chief India economist at Barclays, putting growth at 0.4% for the quarter.

SBI Research recently raised its estimate for third-quarter performance to 0.3% growth with an upward bias.

Global brokerage Nomura took a more optimistic view, estimating India’s third quarter growth at 1.5%, according to Sonal Varma, its chief India economist. These projections point to a faster recovery than anticipated earlier-–most economists had expected negative growth in Q3, followed by a small positive rise in GDP in the March quarter.

The statistics office has estimated a 7.7% contraction in FY21, which implies a small decline in the second half of the fiscal year after a15.7% drop in the first half.

“The corporate results so far also reinstate the fact that Q3 growth would be much better than the Q2 growth. The corporate GVA (gross value added) of 1,129 companies has expanded by 14.7% in Q3 as compared to 8.6% growth in Q2 (of 3,758 companies ex-telecom),” said an SBI Research report.