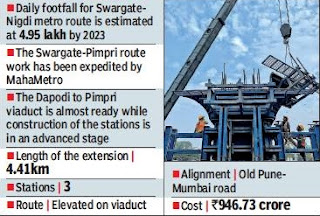 The state cabinet has approved the Metro’s extension up to Nigdi. The route between Pimpri and Nigdi will be 4.41km long and will have three stations at Chinchwad, Akurdi and Nigdi.

The project will be executed by MahaMetro which is constructing the Swagate-Pimpri corridor.

The extension proposal was under consideration. The MahaMetro has prepared a detailed project report which was tabled before the state government.

The plan will now go to the Union ministry of housing and urban affairs. The extension will be part of the metro’s ongoing phase-I.

The total cost of the project is pegged at Rs.946.73 crore. The state government on Wednesday said it will contribute Rs.170.3 crore of which Rs.90.6 crore will come through loans.

The Union government will give a 10% of the total expenses while some amount of the project cost will be raised through loans in addition to Pimpri Chinchwad Municipal Corporation’s share.

The extension will be completely elevated up to Nigdi and will be aligned with the old Pune-Mumbai route.

The MahaMetro has already done adequate provisioning at Pimpri to the existing metro viaduct to carry out the extension.

Officials said the extension work can begin after all permissions are received.