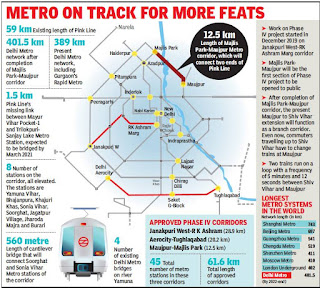 Next year, Delhi Metro will complete 20 years of operations. But that’s not the only milestone it will reach in 2022. It will also become the eighth largest Metro network in the world by joining the coveted 400km club, which includes the transit systems of Shanghai, Beijing, Guangzhou, Chengdu, Shenzhen, Moscow and London.

The corridor that will take Delhi Metro to new heights is a rather diminutive one — the 12.5km Maujpur to Majlis Park corridor of Phase IV. When Delhi Metro Rail Corporation first started construction work on the Phase IV project in December 2019, it was the 29km Janakpuri West-RK Ashram Marg corridor, which is an extension of Magenta Line (Botanical Garden-Janakpuri West).

However, DMRC has now shifted its focus to the Majlis Park-Maujpur corridor, which will turn Pink Line (Shiv Vihar-Majlis Park) into a complete circle as it will be the first section of Phase IV to be opened to the public. By that time, the 1.5km missing link at Trilokpuri is also expected to be bridged and Pink Line would function with complete circular services.

DMRC managing director Mangu Singh said the corporation is putting more effort in completing the Maujpur-Majlis Park corridor first. “It will be the first section to open and our intention is to complete it by the end of next year. By doing so, the Delhi-NCR network will cross 400km. That is why this line is very important,” he added.

Since the Delhi Metro network is already 389km long, the moment this section of Pink Line is opened, it will cross the prestigious 400km mark that only seven other Metro networks in the world can boast of.

Though DMRC started construction on the Janakpuri West-RK Ashram Marg corridor much earlier, issues related to permission for cutting of trees caused delays.

Delhi Metro’s network is already larger than most older systems like Paris or New York and would be touching the distance of Moscow Metro (410km) and London Underground (402km), but the top five longest networks are all in China. The metro system in Shanghai (743km) is at the top, followed by Beijing (697km), Guangzhou (541km), Chengdu (519km) and Shenzhen (411km). Delhi Metro’s network will reach 401.5km by 2022-end.

The construction of Delhi Metro’s first corridor — Red Line — started in 1998 and the first section between Shahdara and Tis Hazari was opened to the public on December 25, 2002. December next year would see Delhi Metro complete 20 years of operations.

The operational Maujpur station has been designed to meet the Phase-IV requirement as an interchange station with four platforms. Even now, passengers who travel to Shiv Vihar have to change trains at Maujpur as a separate Maujpur-Shiv Vihar section functions as an independent line. The interchange at Maujpur, however, is seamless as passengers can directly change trains from the platform level itself.