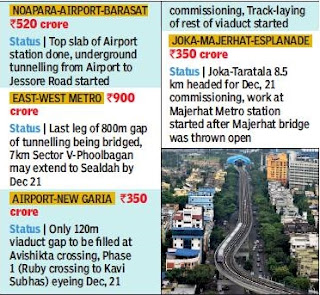 For poll-bound Bengal, there has been an enhanced allocation in the Budget for the city’s Metro projects this time. The outlay is Rs.2,263 crore against last year’s Rs.1,542 crore.

The Noapara-Barasat corridor via Airport has emerged a gainer for the 2021-22 fiscal in the Budget, with an allocation of Rs.520 crore as against last Budget’s Rs.204 crore. But percentage-wise, a substantial amount has come for the Joka-Esplanade Metro project that had received just Rs.99 crore in the last Budget. This time, Rs.350 crore has been allocated for the project, as the 8.5km Joka-Taratala section is progressing with a December-2021internal deadline. But with the Majerhat bridge completed, work is on in full swing to complete Phase 2 or the 2.6km Taratala-Mominpur stretch by December 2022.

The allocation for the New Garia-Airport project is a disappointment, even though it is Rs.22 crore more than last year. The Rs.350 crore allocated this time, officials said, is grossly insufficient because they were expecting a 2.5 times larger share — something around Rs.700 crore this time — given the 32-km corridor (unrevised Rs.4,259.50 crore estimate) is eyeing a truncated 5km Garia-Ruby operations in December, this year.

Officials of implementing agency Rail Vikas Nigam Limited were anxiously hoping the government, while giving a realistic outlay in the pandemic year, wouldn’t withhold the higher sum, since the corridor has gained momentum at last. The project, when it was given Rs.328 crore last year, was mired in land logjams.

East-West Metro has got Rs.900 crore against last year’s Rs.905crore. East-West Metro has Japan International Cooperation Agency, which is lending 48% of the total Rs.8,575 crore cost, as the principal funding agency. The 7-km Sector V-Phoolbagan section is likely to extend to Sealdah by the year end, and the entire 16km Sector V-Howrah Maidan stretch, via the Hooghly river, may be operational by March.

Officials expected more funds for the Noapara-Barasat line. The 7-km Noapara-Airport section, of which 2km is underground, too, has a December 2021 deadline.

The 4-km Dakshineswar extension of the north-south corridor has been given only Rs 1crore since it’s about to be commissioned.