Domestic airfares up 30%, capacity capped at 80% 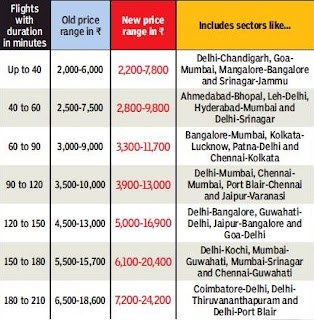 Flying within the country will now cost up to 30% more. The central government has increased airfare range, while capping domestic flight capacity at 80% of pre-Covid schedules till March 31. Minimum fares have been increased by 10% and maximum are up by 30%.

For now, the revised fare bands will remain valid till March 31, though the government has indicated that they could be in force till domestic flights return to pre-Covid levels this summer. Airfare range for flying between Delhi and Mumbai, for instance, will now be Rs.3,900-Rs.13,000, instead of Rs.3,500-Rs.10,000 earlier. These are economy one-way fares that do not include user fee of airports, passenger security fee (Rs.150 for domestic) and GST.

The aviation ministry had last May classified domestic flights into seven categories based on flying time — starting at flights below 40 minutes and going up to those with flying time of 3-3.5 hours — and set their fare range. Airlines are currently required to sell at least 20% seats at fares below the midpoint of the minimum and maximum fares.

The airfare band has been revised upwards now as the price of jet fuel has risen significantly since last May when the fares were set. Once fare bands are removed, airlines will be free to do their own revenue management through ticket pricing.