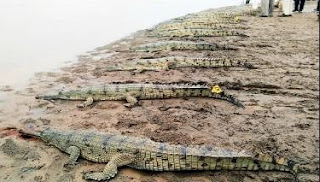 The gharial reintroduction in the Beas Conservation Reserve is a key project of the government of Punjab which aims to establish a breeding population of critically endangered gharial in the rivers of the state.

Gursharan Singh, DFO (wildlife) Hoshiarpur, said a joint team of the wildlife division Hoshiarpur and WWF-India has been formed for daily monitoring of gharials for next one month. Gitanjali Kanwar, coordinator, WWF-India, said post release, monitoring is one of the vital aspects of the gharial reintroduction. The surveys will focus on understanding dispersal, habitat preference, population ecology and general wellbeing of the released gharials.

About 40-50% of the reintroduced gharials can be spotted in the Beas Conservation Reserve any time depending on the water levels and season of survey.