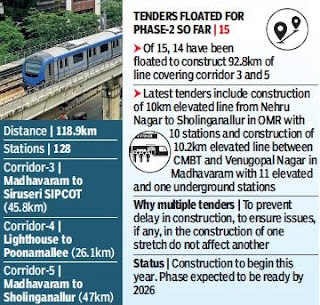 Calling for contractors to bid for construction of the stretches near Madhavaram and the IT corridor along the OMR, CMRL has floated 14 tenders to build the 92.8km line of the three-corridor 118.9km phase-2 to prevent delays and finish the work faster.

The line, covering corridor 3 and 5, includes a circular route that will take commuters around the city touching the northern and southern suburbs in about two and a half hours in a single train ride. In total, 15 construction tenders have been floated covering all three corridors. Invitation for bids is pending only for a 10km stretch between Lighthouse and Meenakshi College in Kodambakkam. Construction of the elevated stretch between Powerhouse and Poonamallee will begin later this year and the phase is expected to be ready by 2026.

Splitting the 92.8km into smaller stretches and floating separate tenders for each stretch was one of the decisions CMRL took after suffering delays in constructing the 45km phase-1, where contractors who had taken work for one long stretch could not complete it on time. “Assigning a small stretch to a contractor means they would get the line ready within the deadline. Also, if there is an issue causing delay in the construction of one line, it would not affect the other stretches,” an official said. It took nearly a decade to complete the two corridors of phase-1.

CMRL has also made several other changes for faster construction including reducing the size of stations by more than 25%, changing some underground routes to elevated and acquiring more government lands than private property, which could reduce project cost and prevent delay in construction.