Kolkata: Metro ride from Kavi Subhas to Dakshineswar in 62 mins 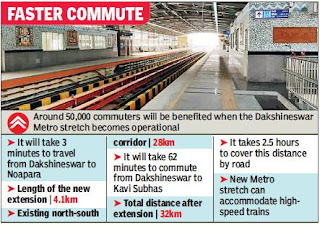 It will take 62 minutes to cover the 32km length between Dakshineswar and Kavi Subhas Metro stations. Currently, the time needed to cover the 28km Noapara-Kavi Subhas stretch of the existing north-south corridor is 59 minutes. So, the calculated time for travelling the 4.1km extension from Noapara to Dakshineswar is only three minutes.

The railways officially announced that Prime Minister Narendra Modi would be inaugurating the much-awaited Rs.464-crore Noapara-Dakshineswar Metro on Monday along with other railway projects.

“The average speed is around 50kmph from Kavi Subhas to Noapara. But the train will zip faster between Noapara and Dakshineswar,” said an official.It had been reported that the new section’s tracks were laid in such a way so as to equip them to accommodate speed higher than the existing north-south line.

The railways’ statement said that around 50,000 commuters coming from Howrah, Hooghly and North 24 Parganas will be benefitted when the Dakshineswar stretch is added to the north-south Metro. Many suburban train travellers of Eastern Railway will be able to avail of Metro services by crossing the Bally Bridge.

“Students, professors and scholars of ISI’s Baranagar campus, RBU and CU’s economics department will also be benefited,” said the railways’ statement, adding that the Baranagar and Dakshineswar Metro stations are close to the suburban railway stations and Belghoria Expressway, the gateway to North 24 Parganas.

Modi will unveil a host of railway projects on Monday, according to the statement. These projects include South-Eastern Railway’s 30km third line between Kalaikunda and Jhargram. “The PM will also dedicate the doubling of Azimganj to Khargraghat Road section, which is a part of Howrah – Bandel-Azimganj section of ER at a cost of Rs 239.3crore and the fourth line between Dankuni and Baruipara of Howrah-Bardhaman chord line and the third line between Rasulpur and Magra of Howrah-Bardhaman main line,” said the statement.