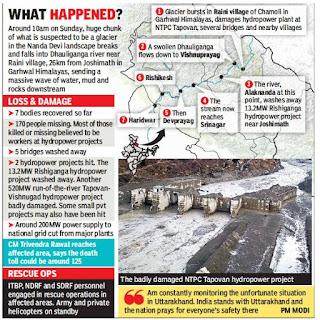 At least 170 people have been reported missing after a glacier broke off near Raini village in Tapovan area of Chamoli district in the Garhwal Himalayas on Sunday morning, triggering massive damage in its wake that was reminiscent of the 2013 Kedarnath tragedy. By evening, bodies of seven men were recovered, but no one could say how many have died in the catastrophe that has once again shaken Uttarakhand.

The 13.2 MW Rishiganga hydropower project near Jashimath was completely washed away; the 520 MW NTPC hydro project on the Dhauliganga river near Raini was partially damaged and at least five bridges were impacted by the surge of water that was unleashed, cutting access to a number of villages in the area.

The State Emergency Operation Centre said that of the missing persons, 148 were in the NTPC hydropower site whereas 22 were at the Vishnugad project. Most of them are believed to be workers involved in the hydropower projects.

“The maximum water level at the Tapovan barrage is 1,803 metres, but as per initial reports, the water level crossed 1,808 metres, causing the breakage,” said Piyoosh Rautela, executive director of the state’s disaster mitigation and management centre.

Chief minister Trivendra Rawat, who conducted an aerial survey and went to areas near the disaster site, announced Rs 4 lakh relief to the next of kin of those killed. PM Modi also announced an ex-gratia of Rs 2 lakh for the families of the deceased. Later in Dehradun, Rawat said a team of 100 Army personnel, including those from the engineering task force, and 250 personnel from ITBP's 1st battalion are engaged in rescue operations.