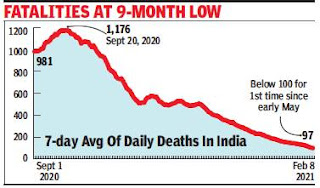 More than 50% of India’s states and Union Territories reported no fresh Covid fatality on Tuesday, with no death recorded in 19 of the country’s 36 states and UTs, including in Andhra Pradesh, Rajasthan, Odisha, Jammu & Kashmir and Jharkhand.

The daily toll from the pandemic, at 94, remained under 100 for the fifth day running, pointing to the sharp decline in fatalities across the country. The seven-day rolling average of daily deaths in the country slipped below 100 on Monday, for the first time since last May.

Kerala continued to record nearly 50% of all cases, with 5,214 new infections detected in the state on Tuesday, followed by Maharashtra at 2,515.

For the second consecutive day, Mumbai reported only three Covid-19 deaths. On January 3 and January 4 too, the city had seen three deaths each. The city’s Covid-19 toll now stands at 11,398. On Tuesday, 24 of the 36 districts in Maharashtra didn’t report a single Covid-19 death. The remaining dozen districts recorded 35 deaths, of which Pune accounted for the highest (7), followed by Nagpur and Satara that registered six deaths each. Maharashtra had seen a 291-day low of 15 deaths on Monday before it jumped to 35 on Tuesday.

Delhi, too, turned a significant corner in the battle against the pandemic: no fresh death was reported in the capital on Tuesday, for the first time in nearly nine months. The last time the city reported zero daily fatality was on May 11 last year. In recent days, the lowest daily toll from the pandemic was two, recorded on two separate days. There were just 100 fresh cases in the city. Neighbouring Uttar Pradesh, too, recorded no fresh fatality on Tuesday, again for the first time in nine months.