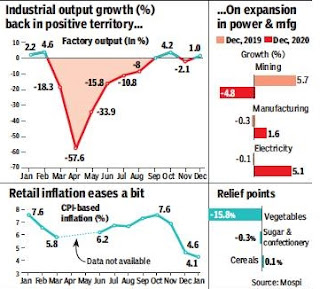 Retail inflation slowed to a 16-month low in January on the back of cooling of some food items, while industrial output growth clawed back into positive territory in December, bringing some cheer for an economy battling a record slump due to the impact of the deadly pandemic.

Retail inflation, as measured by the consumer price index, eased to 4.1% in January, slower than the 4.6% recorded in the previous month. It has moderated sharply from the 7.6% posted in the year-ago period. Rural inflation was at 3.2% in January, while in urban areas it was higher at 5.1%.

Inflation in the food and beverages segment slowed to almost one-and-a-half year low of 2.7%, while vegetable prices fell 15.8% year-on-year during the month. But prices of some protein items continued to be in double digits. Meat and fish prices rose an annual 12.5% in January, while egg prices were up 12.9% and oils and fats at 19.7%. Core inflation (excluding food and fuel) remained at 6.5%, while inflation in health, personal care and transport also remained high during the month.

Inflation for fuel components rose to 10-month high of 3.9% in January compared with 3% in the previous month and 3.7% in January last year. Some economists said the lower retail inflation print may help reinforce the central bank’s accommodative monetary policy stance although a cut in interest rates is not seen for now.

Separate data showed industrial output growth rose an annual 1% in December after a downwardly revised contraction of 2.1% in November. It was marginally above the 0.4% growth recorded in December 2019. During the April-December 2020, industrial production contracted 13.5% compared to a growth of 0.3% in the same period last year.