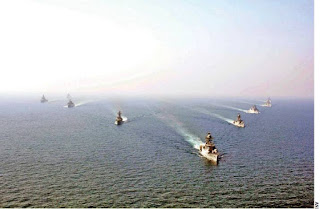 The mammoth Tropex, or the ‘theatre level operational readiness exercise’ that is held biennially, has brought the country’s western and eastern fleets together to validate the Navy’s “offensive-defence capabilities” towards safeguarding national interests in the maritime domain and promoting peace and stability in the IOR, said senior officers.

The exercise, which also includes units from the Army, IAF and Coast Guard, will culminate in the third week of February. “Tropex is being progressed over distinct phases that also test the Navy's transition from peacetime to hostilities,” said an officer.