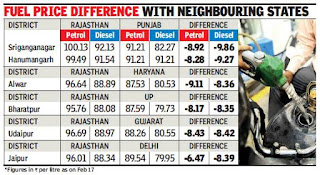 The price of regular petrol consumed by the masses shot up to Rs.100.13 a litre in Sriganganagar on Wednesday, the first time an automotive fuel has crossed the Rs 100-mark anywhere in the country.

But that’s not all. Consumers in the district will have to pay more from Thursday as petrol price was again hiked by 26 paise taking its cost to Rs.100.39.

With the latest hike, petrol and diesel prices in Jaipur climbed to record highs of Rs.96.37 and Rs.88.69 per litre, respectively.

In other states, the prices mostly ruled above Rs.90 a litre mark as high central and state taxes bumped up the impact of rising crude prices.

Diesel prices too made a record at Rs.92.1 a litre in Sriganganagar, while generally raging well above Rs. 80 per litre in other states.

Unmoved by these record prices, the Centre has ruled out any tax cut and is blaming oil exporters for jacking up crude prices.

This is unlike in October 2018, when, after petrol price rose to Rs.84 a litre and diesel Rs.75.45 in Delhi, the Centre had reduced excise duty by Rs.2 per litre on October 4 and again by Rs.1.5 the next day. Some 18 states also reduced VAT at the Centre’s behest.

Consumers in Rajasthan currently pay more than others because the state has the highest tax on petrol and diesel in the country. After reducing VAT by 2% last month, the state now charges 36% VAT and road cess of Rs 1,500 per kilolitre on petrol. Diesel attracts 26% VAT and road cess of Rs.1,750 per kilolitre. Since VAT is charged as per cent of the basic price, there is a proportionate increase every time pump prices are raised. Higher freight charges for Sriganganagar further push up retail rates in the district than, say, Jaipur.