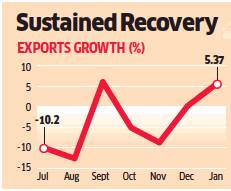 In an indicator of economic revival, India’s outbound shipments rose for the second consecutive month in January, driven by growth in exports of engineering goods and drugs & pharmaceuticals.

The trade deficit narrowed to $14.75 billion from $15.44 billion in December. The gap was $15.3 billion in January 2020. This is the second consecutive month of a growth in exports. Exports had grown 0.14% year on year in December.

Imports of other segments which recorded growth are pulses, pearls, precious and semi-precious stones, vegetable oil, chemicals, and machine tools.

Non-oil, non-gold, silver and precious metals imports — an indicator of the strength of domestic demand-—were $26.35 billion in January, recording a growth of 5.94%.