AI planning to phase out its iconic Boeing 747 jumbo jets 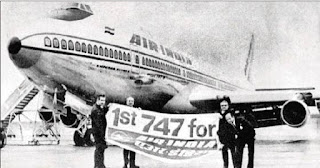 Air India is planning to phase out a key slice of its history — the Boeing 747s — which it has been operating for exactly 50 years now and are synonymous with the Maharaja’s long-gone heydays.

Three of the four B747s in AI fleet (one is in no condition to fly) were mainly being used for VVIP flights and regular commercial ones when not used by the dignitaries. Last year, the government got two new state-of-the-art Boeing 777s as India’s desi Air Force One which will be exclusively used for the President, PM and Vice-president’s ultralong/ long/ medium haul international visits. Recently the government conveyed to divestment-bound AI that its requirement for the old warhorse B747s will not be much for VVIP flights.

“We are planning to phase out the jumbo jets. The final decision will be taken by AI board, possibly in its next meeting. The planes are over 25 years old on an average and will be scrapped. Their residual value lies in the about 10 engines we have of these 747s that could fetch about $2 million apiece,” said a senior official.

With the 747s, AI under JRD Tata had set new levels of inflight luxury. It introduced a new “Palace in the Sky” livery and branding for this aircraft. The tastefully decorated staircase to the upper deck; jharokha interior flight panels; dewans and bar were way ahead of their time in the 70s.

The drastically reduced demand for air travel during Covid has shortened the commercial lifespan of even new-gen four-engine passenger jets — B747, A340 and A380 — with airlines using them globally grounding them; reducing their use or cutting short their use-by period — in favour of the frugal twin-engine medium/ long haul jets like B777, B787, A330 and A350s.

In the last two decades, the 747s were used for commercial flights.

The government would inform AI in advance when the planes were required for VIP flights and the seats in the lower deck would be removed to make way for the dignitaries’ bed and meeting area. Top bureaucrats travelling with the president, PM or VP would sit in the upper deck.

“These beautiful planes have served us very well. They had become expensive to operate when we got the new-gen B777 and B787s. They have truly earned their retirement,” said a 747 pilot.

An old-timer in AI Engineering, that maintains the Maharaja’s fleet, recalls that the upper deck of the B747 would often serve play area with toys for then very young Rahul and Priyanka Gandhi when they used to travel with their grandmother, PM Indira Gandhi.

AI could be the only commercial Indian airline ever to operate four-engine aircraft. Vijay Mallya had ordered the four-engine Airbus A340s for Kingfisher, but could never induct them in the fleet before the airline shut down in 2012.