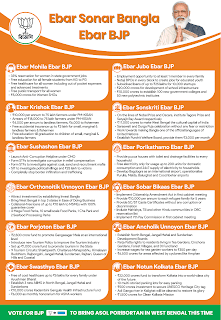 BJP came out with a shrewdly crafted, please-all manifesto for West Bengal polls—catering to all sections, placing special focus on women’s empowerment and giving emphasis to backward sections and ethnic groups and castes.

Called ‘Sankalp Patra’ and released by Union home minister Amit Shah, the manifesto takes identitarian politics to new lengths and reflects the party’s self-avowed confidence that a regime change in Kolkata is imminent.

The manifesto promises to regularise the citizenship of refugees after assuming office, an assertion which at once tries to convey fidelity to a poll plank which resonates with a significant section of the electorate.

“Refugees have been living here (in Bengal) since the 1970s. We will implement CAA in the first cabinet meeting and provide citizenship to them; Rs 10,000 per year will be given to families getting citizenship,” Shah said. Notable among schemes for girls is free education, termed “from KG to PG”, and 33% quota for women in state government jobs.

The manifesto earmarks a Rs 30,000 crore fund to be spent over five years to develop infra in 10 cities. Rs 22,000 crore has been earmarked for transforming Kolkata into “a city of future”.

At a rally in Bankura, PM Modi put his “head” on the line for “Didi to kick if she wants”, but vowed he would not let her “kick away Bengal’s dreams”. He said a BJP government will give “piped water to 1.5 crore people and free medical support,” adding, “BJP runs on schemes, TMC on scams”.

The manifesto also promises to bring Mahishya, Teli and other Hindu OBCs under the ambit of OBC reservation. On the healthcare front, the party proposed three new AIIMS — in north Bengal, Jangalmahal and the Sunderbans. A Rs 10,000 crore healthcare infrastructure fund was also proposed.

The manifesto does not leave out arts and culture, something that has always resonated in the Bengali mind. It promises a Tagore Prize “on the lines of the Nobel Prize”, and a Satyajit Ray Award, “on the lines of Oscar”. If voted to office, the party also promised to keep aside Rs 500 crore for Kolkata to get Unesco Heritage City tag.

“Refugees have been living here since the 1970s, and are pained at not having citizenship. We will implement CAA in the first cabinet meeting and provide citizenship to them,” Shah said. Stressing on a “zero tolerance to infiltration” policy, he said a special fund would be created for refugees, from which each family would be provided Rs 10,000 per year after they receive citizenship. A corpus of Rs 100 crore was announced for that.

Regarding the “KG to PG” scheme, he said there will be a corpus of Rs 500 crore to provide financial aid to meritorious girls. Apart from a special Rs 50,000 bond for families with a girl child, the manifesto announced Rs 1 lakh to women from the SC, ST, OBC and economically weaker sections at their wedding.