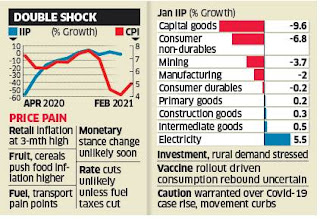 Industrial production contracted unexpectedly in January after posting modest growth in the month before, underlining the fragile recovery that could be at risk from rising Covid-19 infections in key states.

Meanwhile, separately released data showed retail inflation accelerated more than expected to a three-month high of 5.03% in February, which may stoke concerns of a further rise in bond yields and higher market interest rates.

Industrial production contracted 1.6% in January against a 1.5% rise in December and 2.2% expansion in January last year, with most key sectors reporting declines from a year ago. “The contraction in IIP numbers at -1.6% for January comes as a bit of surprise after turning positive in December,” said M Govinda Rao, chief economic adviser, Brickwork Ratings.

“The manufacturing sector continues to contract at 2% (showing) that we still have some distance to cover before the economy recovers,” he said.

A Reuters poll had predicted a 0.9% rise in industrial production in January, backed by manufacturing, which has the highest weight in IIP. It posted a 2% decline in February while mining shrank 3.7%. Electricity generation was up 5.5%. Eighteen of the 23 sub-sectors of manufacturing contracted in January.

“The major disappointment is negative growth in consumer goods, which was expected to be positive,” said Madan Sabnavis, chief economist at CARE Ratings. “The pent-up demand story has quite clearly paused as seen by these numbers.”

Capital goods production, an indicator of investment, shrank 9.6%, indicating that the anticipated investment revival is yet to manifest itself. “We remain circumspect regarding the intensity of the rebound in consumption immediately after the vaccine rollout widens, as some categories of households may choose to rebuild the savings that they had drained during the lockdown and post-lockdown period,” said Aditi Nayar, principal economist, ICRA.

In the April-January period of FY21, India’s factory output shrank 12.2% compared with 0.5% growth in the year-ago period.

India’s economy is widely expected to post strong double-digit growth in FY22, but a Covid-19 resurgence, higher fuel and commodity prices and possibly likely firmer interest rates have emerged as risks to the recovery.

Some cities in Maharashtra, which is seeing a spike in Covid-19 cases, have imposed lockdowns to contain the surge.

The Indian economy expanded 0.4% in the December quarter to emerge from the pandemic-induced technical recession but is projected to shrink 8% in FY21.

Retail inflation, as measured by the consumer price index, had been easing for the last two months and had dropped to a 16-month low in January.

Despite the spike, retail inflation is still within the RBI’s mandated target of 4% with a band of 2 percentage points on either side, but higher commodity prices remain a risk. Food and beverages firmed up to 4.25%, compared with a rise of 2.67% last month. Fuel and light inflation was 3.53% compared with 3.87% in January while household goods and services inflation rose to 3.07% from 2.8% and health inflation firmed up to 6.33% from 6.02%.

Higher fuel prices have been passed through, reflecting an 11.36% increase in transport and communications inflation.

“Core inflation hardened to a three-month high 5.7% in February from 5.5% in the previous month, reiterating that an uptick in commodity prices, rising demand, and emerging pricing power will keep inflationary pressures intact,” said Nayar.

Last month, the monetary policy committee of the Reserve Bank of India unanimously retained the policy repo rate at 4% while maintaining an accommodative stance to support the economy.

This is the last set of retail inflation data before the central bank and the finance ministry announce a fresh inflation targeting framework.

The central bank has favoured continuing with the current target. The higher inflation print could put further pressure on bond yields, which have already firmed up in line with the rise in the US and other major economies. The monetary policy committee will meet on April 5-6.