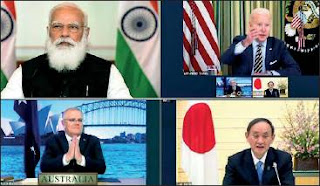 In a first, the four leaders of the Quad — Narendra Modi, Joe Biden, Yoshihide Suga and Scott Morrison — reaffirmed their commitment to a “free and open Indo-Pacific” in a joint oped in the Washington Post.

Separately, US national security adviser Jake Sullivan said China was not only discussed at the Quad summit but also the US intended to take up Chinese aggression in Taiwan, Senkakus and eastern Ladakh in his forthcoming conversation with top Chinese officials.

The oped may well signal the Quad’s response to Chinese statements that all four countries had different fish to fry in their ties with Beijing and that economic and other priorities would prevent them from really presenting a united front.

The oped said, “We are striving to ensure that the Indo-Pacific is accessible and dynamic, governed by international law and bedrock principles such as freedom of navigation and peaceful resolution of disputes, and that all countries are able to make their own political choices, free from coercion.”

Sullivan said at his press conference after the summit, “What we believe are fundamental interests and what our concerns with their activities are, whether it’s on Hong Kong or Xinjiang or in the Taiwan Strait, or frankly, the issues that we heard from our Quad partners: their coercion of Australia, their harassment around the Senkaku Islands, their aggression on the border with India.” There would be, he said, an in-person Quad summit later this year.

On efforts to combat the Covid-19 pandemic, the oped said, “Together, we pledge to expand and accelerate production in India of vaccines.” The oped added, “We know we can’t and will not succeed without cooperation. We will strengthen our partnerships in southeast Asia, starting with Asean and engage the IOR to meet this moment. The Quad is a flexible group of like-minded partners dedicated to advancing a common vision and to ensuring peace and prosperity.”