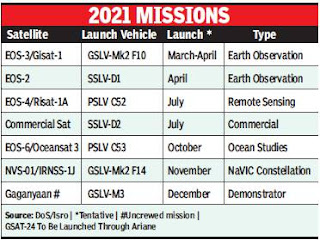 With the pandemic impacting missions in 2020, Isro is targeting at least seven more launches, including the uncrewed Gaganyaan mission, from India this year. The PSU New Space India Limited plans to launch one satellite through a foreign launch provider.

Of the six launched from Sriharikota, three will be for earth observation, including one for ocean studies, a remote sensing satellite, a commercial launch, and a navigation satellite.

A science satellite to study the Sun (Aditya-L1) initially targeted for this year won’t happen. Among launch vehicles, other than PSLV, Isro will launch three GSLV missions, including the Mark-III as part of the uncrewed Gagnayaan mission. Two more will be SSLV (small satellite launch vehicles) class of rockets. NSIL plans to launch the GSAT-24, being acquired and launched for a private customer — Tata Sky’s DTH business — through Arianespace.

Isro chairman K Sivan said: “We can consider it to be 14 more missions as each launch is two missions (launch vehicle and satellite). The top priority is Gaganyaan.” He said Aditya had to be pushed to next year to the next available launch window.

Sivan said 2021 will see multiple indigenous technologies tested. “We have two SSLV launch vehicles technology demonstration flights and testing the revamped GSLV and several technologies on the satellite front,” Sivan said. Isro hopes to completely stop importing these technologies in line with the Centre’s Atmanirbhar mission. “Apart from giving us the technological edge, it’ll also save us foreign exchange,” he added.