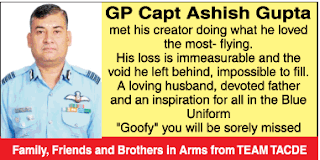 A senior IAF officer was killed in a MiG-21 ‘Bison’ crash at Gwalior’s Maharajpur air base on Wednesday morning.

Group Captain A Gupta was taking off on a combat training mission when it crashed. Friends and family released a message in tribute: "Gp Capt Ashish Gupta met his creator doing what he loved the most — flying. His loss is immeasurable and the void he left behind, impossible to fill. A loving husband, devoted father and an inspiration for all in the Blue Uniform 'Goofy' you will be sorely missed."

A court of inquiry has been ordered to determine the cause of the accident,” IAF tweeted. This rank is equivalent to Colonel in the Army. The ‘Bison’ is an upgraded version of MiG-21 and was used by Wing Commander Abhinandan Varthaman to shoot down an F-16.

Information on the crash is scanty. “They have informed us about the accident, and nothing further,” Gwalior collector Kaushlendra Vikram Singh said.

This is the second such incident this year. On January 5, a MiG-21 ‘Bison’ crashed at Suratgarh Air Base in Rajasthan soon after taking off. The pilot ejected safely. A MiG-21 trainer that had taken off from Gwalior had crashed in Madhya Pradesh’s Bhind district in September 2020. Both pilots — a Group Captain and a Squadron Leader — managed to eject safely. The fighter jet was on a routine mission when it crashed at Bhind's ‘Chaudhary Ka Pura’ village in the Chambal ravines around 10am.