Positivity rate in Maharashtra past its peak of July 2020 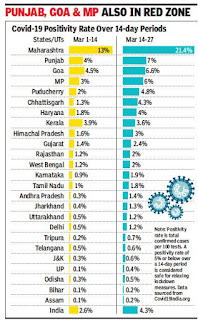 Maharashtra is fit for imposing a fresh lockdown in its containment zones with the Covid-19 positivity rate, total confirmed cases per 100 tests, doubling almost every fortnight since January 26. It has gone up to 21.4% (March 14-27), well past its peak of July last year.

Punjab, Goa, Madhya Pradesh and Puducherry have entered the red zone, too, with their infection rates ranging between 5% and 7%, the highest being 7% in Punjab. Kerala, which has reported over 11 lakh cases so far, the second highest after Maharashtra, has managed to bring its positivity rate below 4% during the last 14-day period.

The increase in Maharashtra has been consistent — from 4.7% (January 26-February 8) to 7.7% the following fortnight and 13% during March 1-14. A high positivity rate is indicative of the fact that the state is only testing the sickest and not conducting enough tracing, testing and isolation of patients.

As per a World Health Organisation advisory, issued in May last year, governments should consider relaxing lockdown in containment zones only if positivity rate remains 5% or lower for at least 14 days. There are currently four states and a Union Territory that qualify for lockdowns.

A study found that Kerala has managed to contain the spread of the virus despite a second wave hitting the state badly. It has brought down the positivity rate from 9% (January 26-February 8) to 7% in the following two-week period, to 4% in the first fortnight of March and to 3.6% (March14-27).