More on the Ken-Betwa linking project 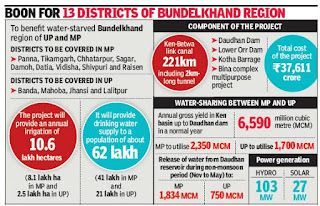 After resolving their differences over sharing of water from the proposed Ken-Betwa interlinking of river  project, chief ministers of Uttar Pradesh and Madhya Pradesh on Monday signed a tripartite agreement with the Centre in virtual presence of Prime Minister Narendra Modi.

The signing of the agreement will pave the way for initiating other pending actions for implementation of the project which could not be taken up due to the states’ tussle over share of water during the non-monsoon period.

The revised agreement will allow Madhya Pradesh to get additional water from the project which will be implemented at an estimated cost of over Rs 37,600 crore. Dispute between UP and MP could be settled when the former agreed to drop its demand for a higher share.

Even MP has had to compromise. The Centre did not agree to its demand to allow it to use the entire quantum of surplus water at Daudhan dam site in the upper catchment area. The Daudhan dam is one of the key components of the Ken-Betwal ILR project. Speaking on the occasion, Modi said the agreement was important to realise former Prime Minister Atal Bihari Vajpayee’s dream in the interest of millions of families of Uttar Pradesh and Madhya Pradesh.

The Centre will bear 90% of its total cost. Though forest clearance of the Daudhan reservoir of the project is still awaited, the Centre will soon create a special purpose vehicle – Ken-Betwa Link Project Authority – for implementation of the project in eight years. Noting how the project would benefit the entire water starved Budelkhand region, the Prime Minister said rapid development was not possible without water security and effective water management. He added that the vision of India’s development and India’s selfreliance, is dependent on water sources and water connectivity.