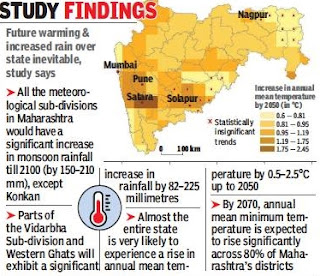 The average annual temperature of Maharashtra is likely to rise by up to 2.5 degrees Celsius by 2050 and the average monsoon rainfall in the state is expected to increase by up to 210mm by the end of the century, according to a study by a Baramati professor published in the prestigious journal Springer Nature. The weather changes are projected to have a serious negative impact on agriculture.

The study, by Rahul Todmal, assistant professor of geography at Vidya Pratishthan's ASC College in Baramati, says that most parts of the state are very likely to experience a rise in annual average temperatures ranging between 0.5 and 2.5 degreed Celsius up to 2050, and considerably warmer conditions after 2033. Among the regions that are expected to register significant warming of over one degree Celsius are parts of the Konkan and Madhya Maharashtra.

The study indicated that over five decades, annual mean minimum temperatures are expected to rise 0.1-1.2°C across 80% of districts. It makes projections based on climatic data from the Earth System Grid Federation, Germany, and the Indian Institute of Tropical Meteorology, Pune, which reveal that the state is expected to witness an increase of 150-210mm in average monsoon rainfall till 2100, apart from the Konkan coast. Parts of the Vidarbha sub-division and Western Ghats will get 82-225 mm more. “A substantial increase in monsoon rainfall and extreme events over Maharashtra would result in flashy runoff, which can cause catastrophic floods,” observed the study.

Todmal said existing literature shows that climate change in Maharashtra are likely to have an impact on agriculture. “Agronomic studies have confirmed that warmer climatic conditions never favour agricultural productivity. The future rise in temperature is very likely to reduce the productivity of traditional rain-fed crops and irrigated cash crops as well,” he said. Previous literature cited in the study have estimated up to a 49% decline in the yield of various crops due to rising temperatures.

Some crops may be more impacted than others, feel experts, one of whom, AN Ganeshamurthy, said, “Under the circumstances presented by the study, temperature variations may marginally affect the productivity of principal crops like sugarcane, rice, sorghum and millet. However, it may have some major effect on wheat productivity.”