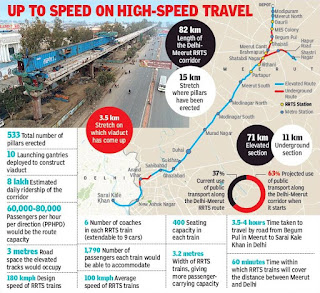 The 82km-long Delhi-Meerut Regional Rapid Transit System corridor has now started taking shape with pillars already erected on a 15km stretch and 3.5km of viaduct being completed. Trains on the high-speed corridor are expected to transport up to eight lakh passengers daily when the project is completed in 2025.

A spokesperson of National Capital Region Transport Corporation said, “The construction of the Delhi-Ghaziabad-Meerut corridor is progressing in full swing. Pier construction of more than 15km of the corridor has now been completed. In all, 533 pillars have been erected completely on which 3.5km of the viaduct has been laid so far.”

“Currently, 10 launching gantries have been deployed and work is on 24x7 to construct the rest of the viaduct. This is a major feat in the construction of any urban transport infrastructure project. The foundation work of other stations in Delhi and Meerut has also started. Design and architecture work is in the final stages. The construction work of the 1.3km-long bridge on the Yamuna has begun. This will be the 17th bridge to come up on the river in Delhi,” added the spokesperson.

NCRTC had received clearance for the project alignment passing through the Yamuna floodplain from National Green Tribunal and Yamuna Standing Committee.

The project would lead to a significantly lesser carbon footprint due to high throughput of 60,000-80,000 passengers per hour in each direction. “The corridor is mostly elevated (about 71km) taking only 3m of road space. The remaining 11km is underground. RRTS will have six car trainsets extendable to nine cars with a capacity of carrying about 1,790 passengers per train, including 400 seating,” said the spokesperson.

The state-of-the-art trains would have a design speed of 180 kmph and an average speed close to 100 kmph. “RRTS will become the backbone of commuter transportation in the NCR, reducing travel time to about one-third. For example, travel time between Begum Pul in Meerut and Sarai Kale Khan in Delhi will reduce to less than 60 minutes compared with about 3.5-4 hours by road,” said the NCRTC official.

“The 3.2m-wide trains will have more capacity to transport people at a faster speed than any other urban transport systems available in the NCR. Once operational, RRTS will take more than one lakh private vehicles off the road. Implementation of RRTS is a part of the recommendation of the high-powered committee on decongesting traffic in Delhi,” claimed the official.

Apart from substantial time savings, the system would have other benefits, like comfort, safety and reliability. “These characteristics will promote use of public transport in the region and the shift will increase substantially. It is estimated that public transportation usage will increase along the corridor from the current 37% to 63%,” said the spokesperson.

The foundation work of four stations — Sahibabad, Ghaziabad, Duhai, and Guldhar — on a 17km priority section between Sahibabad and Duhai has been completed. “Construction of superstructures is in progress for these stations and the foundation work of 16km of the viaduct from the 17km priority section has been completed,” he added.

The 17km priority section between Sahibabad and Duhai is targeted to be commissioned by 2023 and the full corridor by 2025.