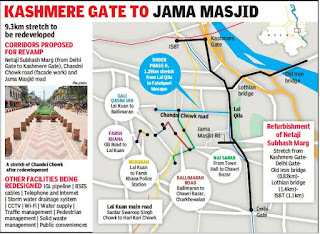 After redevelopment of the 1.2km main stretch in Chandni Chowk, work on the “heritage corridor” is also picking up pace. The Public Works Department  has floated tenders for appointing a consultant to redevelop the 9.3-km stretch from Kashmere Gate to Jama Masjid Road. A meeting was held last month by urban development and PWD minister Satyendar Jain to expedite the project.

The “Mughal glory and heritage corridor” was conceived in 2009, but it hit many hurdles due to various reasons. The project finally got the government’s approval in 2019. A noted architect’s firm had been appointed, but it recently withdrew from the project. Now, PWD is searching for another consultant.

The firm has submitted a detailed project report for the corridor, which is pending approval. Bidders can obtain a copy of this DPR and subsequent works could be taken up in continuation of this unapproved report. Once the consultant is appointed, pre-construction work, such as topographical survey, geotechnical investigation and soil testing, would be done.

The project would be developed in four phases instead of two as planned earlier. A PWD official said ground work would begin once a consultant was finalised. The project, which also involves streetscaping to beautify the stretch, includes Netaji Subhash Marg, Delhi Gate, Kashmere Gate, the phase-II development of Chandni Chowk Road (facade work) and redevelopment of Jama Masjid Road.

For redevelopment of Netaji Subhash Marg, the stretch from Kashmere Gate to Delhi Gate would be developed in parts — from Delhi Gate to Old Iron Bridge (0.8km) to Lothian Bridge (1.4km) to Kashmere Gate ISBT (1.1km). Facades of buildings would be restored on the 1.3-km stretch from Red Fort to Fatehpuri mosque under the second phase of Chandni Chowk redevelopment project.