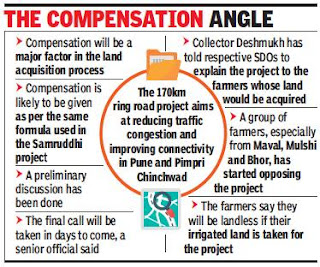 The Maharashtra State Road Development Corporation has hired a private agency to expedite the land measurement exercise for the proposed 170km ring road project in the rural belt of the district.

The project aims at reducing traffic congestion and improving connectivity in Pune and Pimpri Chinchwad.

“We will have to measure around 860 hectare land in various tehsils by the end of this April. The appointed agency has worked in the Samruddhi Expressway project and got the required expertise and experienced manpower. We will work on a target basis to complete the ring road work within the deadline,” MSRDC sub-divisional engineer Sandeep Patil.

On Tuesday, district collector Rajesh Deshmukh and senior MSRDC officials held a meeting with the sub-divisional officers of Maval, Bhor and Mulshi to discuss the issues pertaining to issues such as land acquisition and possible opposition from the local farmers.

The MSRDC will bank on videography of the land plots to prevent any complications or allegations from the farmers in future.

“Farmers often claim or allege that their houses or crucial property had been taken over for the project and seek compensation. If we produce videographic evidence, such challenges can be countered effectively in future. This strategy worked effectively in the Samruddhi project. We will implement the same model in in this project too,” Patil said.

A senior district administration official said the land compensation formula was being worked out. “The compensation is likely to be given as per the same formula that was used in the Samruddhi project, the official said.

The MSRDC has decided to acquire land for a 68km western ring road that will pass through Maval, Mulshi, Velhe and Bhor tehsils.