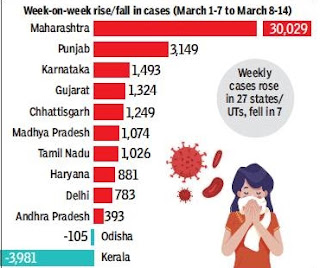 Maharashtra continued to drive the surge in Covid-19 infections in India, accounting for 61% of all fresh cases recorded in the country last week. However, at least 10 other states/ UTs also showed a significant rise in infections during the week (March 8-14), indicating a wide resurgence of the pandemic in the country.

Meanwhile, India recorded 24,458 new cases on Monday, a shade lower than Sunday’s count of 26,386. Given that Mondays see a sharp dip in cases, this Monday’s count was high, over 9,000 more than that reported the same day last week.

In the week gone by, Maharashtra logged as many as 94,686 fresh cases, its highest weekly count since the September 28-October 4 week and a jump of 46% over the previous week. Overall, India reported nearly 1.6 lakh cases during the week.

While Maharashtra had a lion’s share of new cases, infections rose in most parts of the country, except for the northeast and states such as Kerala, Odisha and Uttarakhand. During the week, just seven out of 36 states and UTs registered a week-on-week fall in cases.

On the other hand, seven states registered a rise of more than 1,000 cases over the previous week — Maharashtra, Punjab, Karnataka,