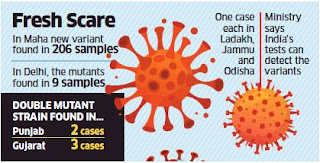 A new “double mutant variant” of the coronavirus has been detected in India, in addition to several “variants of concern” in 18 states, the health ministry said on Wednesday.

The Centre, however, said the variants have no link to the second Covid-19 wave in states and assured that India’s vaccines are effective against the UK and Brazilian variants. “A new double variant — E484Q and L452R — has been seen. The prevalence in Maharashtra is significant — it was found in 206 samples — and even in Delhi (nine samples),” National Centre for Disease Control director Sujeet Kumar Singh said. “It is still being studied so we do not know whether it has a link to the recent surge in cases. But at the same time, we have found it in Maharashtra’s districts where there has been a surge.”

In Nagpur, Singh said, the prevalence of this double mutant virus was substantial at 20%. “In Nagpur, the wards which were least affected the first time, had a large susceptible population,” he said.

Data released by the health ministry show the double mutant strain was found in Punjab (2 cases), Gujarat (3 cases) and one case each in Ladakh, Jammu and Odisha.

The ministry has maintained that so far there has been no link between the variants and the recent surge in Covid-19 cases.

“In mid-December, the UK had found a link between the UK variant and the surge of cases in South England. There are three variants of concern identified internationally — UK, South African and Brazilian variant. All three variants have been linked to a surge in cases internationally. So far we have not been able to find a link,” Singh said.

The health ministry has assured that India’s tests can detect the variants and vaccines are effective against them. “Our public health measures will remain the same against the mutant virus. There will be no deviation. No new symptoms have been associated with them,” said Singh.

The variants were found after genome sequencing was undertaken by the Indian SARS-CoV-2 Consortium on Genomics, a grouping of 10 national laboratories established on December 25 by the health ministry for carrying out genomic sequencing and analysis of circulating Covid-19 viruses, and correlating epidemiological trends with genomic variants.