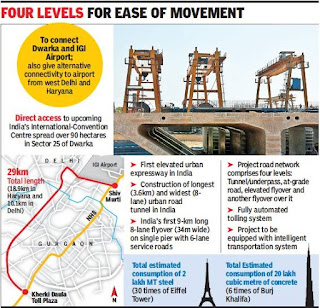 The Dwarka Expressway will be completed before August 15, 2022. This was stated by Union minister for road transport and highways Nitin Gadkari on Thursday. The 29 km expressway, which starts near Shiv Murti on NH-8 and terminates near Kherki Daula toll plaza, is being constructed at a cost of Rs.8,662 crore.

After reviewing the progress of work, the minister said nearly 12,000 trees had been transplanted and their survival rate was 84%. “This is the first time that trees have been transplanted on such a massive scale in the country. We have spent over Rs.25,000 for transplanting one tree using new technologies. Based on this experience, the method will be replicated across the country,” added Gadkari.

The eight-lane Delhi-Gurgaon section of NH-8, which is a part of the Delhi-Jaipur-Ahmedabad-Mumbai arm of the Golden Quadrilateral, currently carries traffic of over three lakh passenger car units, which is beyond its design capacity. This leads to severe congestion. With this project, 50-60% of traffic on NH-8 would be reduced.

“The project will also provide around 50,000 direct or indirect employment opportunities. It will be the firstever elevated urban expressway in India and will immensely help reduce air pollution,” said the minister.

Considering connectivity and congestion, Dwarka Expressway was conceptualised essentially as a bypass for Gurgaon. It would also connect Dwarka to Terminal 3 and take off around 5.3km away from near the railway underbridge, thereby providing alternate connectivity to IGI Airport from west Delhi and Haryana. Besides, direct connectivity would also be provided to the upcoming India’s International Convention Centre, which is being built over 90 hectares in Sector 25, Dwarka.

“We will also build a 5km tunnel from Shiv Murti to Nelson Mandela Road to reduce traffic. The work may start this year. The demand of Gurgaon residents of shifting Kherki Daula toll plaza will also be met. It will be removed before the expressway is inaugurated,” said Gadkari.

The minister added, “The project will be an engineering marvel and have several unique features. It will have the longest (3.6km) and widest (eight-lane) urban road tunnel in India. The road network will comprise four levels — tunnel/underpass, at grade road, elevated flyover and flyover above flyover.”

“The project, which will be equipped with intelligent transportation system, will have India’s first 9km-long eight-lane flyover (34m wide) built on a single pier with six lane service roads. The tolling system will be fully automated at the 22-lane toll plaza,” Gadkari said.