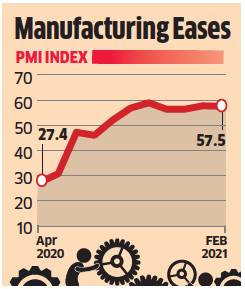 Manufacturing activity in India eased marginally in February and employment decreased as the country saw rise in fresh Covid-19 infections in some states.

The IHS Markit India Manufacturing Purchasing Managers’ Index was 57.5 in February compared to 57.7 in January but remained above its long-run average of 53.6. A reading above 50 indicates expansion while below that signals contraction.

The survey report showed that February data pointed to the strongest increase in input inventories in the survey history as firms reacted to rising production needs by lifting purchasing activity and the expansion in input buying was the fastest in almost a decade.

Going ahead, goods producers expect output to increase over the coming 12 months based on improvement in economic conditions and the lifting of restrictions as the vaccination programme expands.

As per the survey, better demand conditions and successful marketing campaigns reportedly underpinned a further increase in new orders during February.

“Although easing from January, the pace of growth remained sharp in the context of historical data,” IHS Markit said in the report.

India’s economy grew 0.4% year-on-year in the October-December quarter, putting an end to the pandemic-led technical recession. Manufacturing rose1.6% in Q3.

“Indian goods producers reported a healthy inflow of new orders in February, a situation that underpinned a further upturn in output and quantity of purchases,” said De Lima.

High prices of a number of items such as chemicals, metals, plastics and textiles made the overall rate of cost inflation jump to a 32-month high.

As per Rahul Bajoria, chief India economist at Barclays, in an environment of demand normalisation, a return of pricing power could mean the pass-through into core inflation may increase going forward.

“Still, the data indicated that production growth could have been stronger should firms have appropriate resources to handle their workloads,” De Lima added.