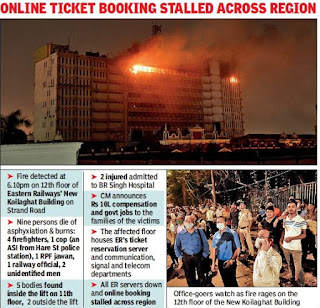 Nine persons — four firemen, a policeman, an Railway Protection Force jawan, a railway official and two unidentified persons — died in firefighting and rescue operations, and two were critically injured after a blaze broke out on the top floor of the G+12 Eastern Railways’ New Koilaghat office on Strand Road on Monday evening.

It was learnt that the deceased and the injured had taken an elevator to the 11th floor and encountered toxic fumes on exiting. The casualty may rise, said sources. Among those missing were firemen Girish Dey, Gaurav Bej, Anirudha Jana and Bidhan Purkayet; Hare Street PS ASI Amit Bhowal; a senior railway official identified as Parthasarathi Mandal; and an unidentified RPF jawan.

The 12th floor, where the fire broke out around 6.10pm, housed servers of the Eastern Railways ticket reservation system and a communication, signalling and telecommunications lab. The building also has a ticketing office on the ground floor. The fire caused the entire ticketing system of Eastern Railway to be halted, as power to the building — and to the servers — were switched off.

“Five bodies were found inside the lift on the 11th floor and two just outside it,” said fire minister Sujit Bose. “Of the seven dead, four were identified as firemen, one was an ASI of the Hare Street PS and one was an RPF personnel. There was another body, which has not been identified yet. Chief minister Mamata Banerjee has made an official grant of Rs10 lakh to the families of the deceased.” Bose said he had himself walked up to the 12th floor and had seen the bodies. Banerjee herself reached the spot late in the evening to oversee the operation. Family members of the bereaved would also get government jobs, she said.

Banerjee, however, appeared miffed at no senior railway official visiting the spot till late in the evening. “This is the Railway’s property, but no one from the Railways has come here yet. I believe they also have a responsibility. The fire department had even asked for a map of the building but they have found no cooperation from Railway officials,” she said.

Apart from the seven officially declared dead, Banerjee feared the worst for two others. “We all know that one shouldn’t use a lift while a building is on fire. I am certain the men who died were all very able, but they still took the lift. Maybe they took it in an urgent effort to reach the source of the fire and lost their life in the attempt,” she added.

It isn’t clear why electricity to the building wasn’t switched off immediately after the fire was reported, or why the firemen chose to take the elevator, since its use is prohibited during fires. Thick toxic smoke, which had built up on the 12th floor after the blaze, is believed to have seeped to the floor below. When the men exited the elevator, they walked straight into a hot and toxic chamber. Sources said they had attempted to withdraw into the lift, but had been overwhelmed by the fumes.