First desi aircraft carrier set to hit waves, search on for its jets 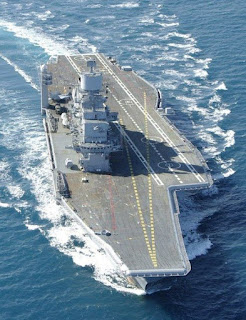 With India’s first indigenous aircraft carrier set to be commissioned next month, the Navy is now fast-tracking its case for acquisition of at least 24-26 supersonic fighters to operate from its sprawling deck on the high seas.

The battle is between the French Rafale-M and the American F/A-18 in what will be a multi-billion dollar government-to-government deal. Both the twin-engine fighters have undergone operational demonstration trials to assess their “suitability and capability” at the shore-based test facility in Goa, which has a ski-jump to resemble an aircraft carrier’s deck.

“The (trial) report will be submitted as soon as possible. The acquisition case will be expedited,” Navy vice chief Vice Admiral S N Ghormade said on Tuesday, ahead of a major naval ‘Swavlamban’ seminar on self-reliance in defence production on July 18-19. The Navy is going full steam ahead on indigenisation and innovation, with 39 of its 41 warships on order being built in India and the ongoing “acceleration of technology development with compressed timelines”. Towards this end, the force fully-backs the twin-engine deck based fighter being developed by DRDO.

But the TEDBF will take at least a decade to fructify. In the interim, the procurement case for foreign fighters with the requisite benefits for the Indian defence industry ecosystem is being expedited. The exact number of fighters required is still being worked out, Vice Admiral Ghormade said. India currently has only one aircraft carrier, the 44,500-tonne INS Vikramaditya, inducted from Russia for $2.33 billion in November 2013.