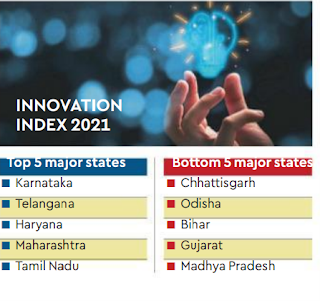 Prepared by Niti Aayog and the Institute for Competitiveness, the India Innovation Index is a tool for the evaluation and development of the country’s innovation ecosystem. It ranks states and UTs on their innovation performance to build healthy competition amongst them.

Karnataka’s high score can be attributed to its peak performance in attracting FDI and a large number of venture capital deals. The state also scores high in the ‘Performer’ dimension, with the highest share of ICT exports and GI registrations. Uttar Pradesh and Haryana have registered significant gains in promoting innovative business environments with a large base of internet subscribers and a safe ecosystem for further investment in the region, according to the report.

“Innovation is the key to sustainable and inclusive growth. It can help us solve the biggest challenges of our times — bringing millions out of poverty, generating livelihood opportunities, and paving the way for an Aatmanirbhar Bharat,” said Niti Aayog member V K Saraswat.

The results showed that Chandigarh topped the ‘knowledge worker’ pillar, while ensuring investment in school and higher education. Delhi has topped the ‘business environment’ and ‘investment’ pillars, with a large number of incubator centres, a skilled labour force and its continuously transforming startup ecosystem. This has been reflected in their overall performance as well. Both performed higher in the ‘performers’ pillars.

Ladakh and Lakshadweep occupy the last positions, with 5.91 and 7.86 scores, respectively. They have consistently performed low on all the pillars due to their geographical shortcomings and economic constraints.