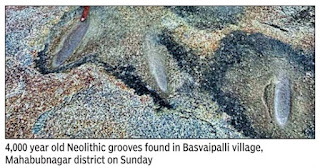 During explorations conducted by archaeologist Dr E Sivanagireddy, four grooves formed out of sharpening of the cutting edge of stone axes made of basalt by Neolithic people were found. They are located on a huge low-profile hillock on which a Venugopala temple was built in the 18th century, said Sivanagireddy. He dated the Neolithic grooves to a period between 4000 BCE to 2000 BCE. “We found these grooves very close to the Mandapa of the temple towards the northeast corner while searching for granite stone quarries to extract new stone for the restoration works of medieval temples at Kolanupaka taken up by Yadadri Temple Development Authority,” said Sivanagireddy.

He said the areas around Basvaipalli might have served as a habitation to the Neolithic man, which was congenial for hunting and agriculture. There are a number of serpent-hood-shaped granite rocks and natural caverns in the hills at Manyamkonda, Choudarapalli, Tatikonda, Rachala, Asnapur and Moosapet, which might have been temporary shelters before they moved to other areas.

He appealed to the local communities to preserve these grooves, which bear archaeological significance.