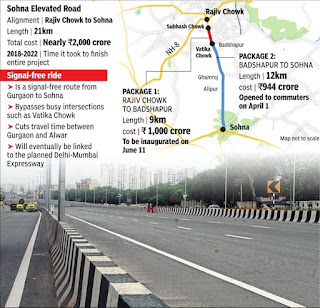 Four years after it was launched, the 21km elevated road from the Gurgaon-Delhi Expressway to Sohna, one of the largest infrastructure projects in Delhi-NCR, finally has an inauguration date — July 11. Union road, transport and highways minister Nitin Gadkari will inaugurate the six-lane Sohna Elevated Road next Monday, Gurgaon MP and Union minister Rao Inderjit Singh announced on Wednesday. The entire stretch can be opened to commuters since work on a 9km portion of the elevated road between Rajiv Chowk and Badshapur finished this week. The remaining portion of the road that connects Badshapur and Sohna was opened to commuters in April. “The project has been completed at a cost of Rs 2,000 crore and will help to reduce the distance between Gurgaon and Sohna by easing traffic movement. Road accidents along the stretch will also reduce because of this project,” Inderjit said. The elevated road gives commuters a signal-free corridor bypassing congested junctions such as Vatika Chowk in Gurgaon. It will also steer some of the traffic that moves towards Sohna from the adjacent Southern Peripheral Road, also a busy road. For those coming from Delhi, the road will give them quick passage to southern Gurgaon and onwards to Alwar in Rajasthan. The road was originally planned to have one access point (Ghamroj) besides the entry and exit to the elevated road, but NHAI officials last month announced that two more access points would be created – near Subhash Chowk and on Jail Road in the city. Apart from the Gurgaon-Sohna connection, the elevated road is expected to cut travel time for the 120km journey between Gurgaon and Alwar to less than two hours. It takes three hours or more to cover the distance.

The route is also a critical piece in the Delhi-Mumbai Expressway link that the Centre is building, a corridor connecting India’s two largest urban centres via Haryana, Rajasthan, Madhya Pradesh and Gujarat. The Gurgaon MP said on Wednesday that the construction of Package 1 cost around Rs 1,000 crore and Package 2 was completed for Rs 944 crore. Work on the elevated road first began in 2018, with an initial deadline of 25 months. Construction was repeatedly delayed due to pandemic disruptions, the ban on construction in NCR during the heavily polluted winter months and issues with shifting existing infrastructure on the route. In August 2020, a 40m-spine of the road collapsed near Sector 48 of Gurgaon, holding up construction for a month.

Apart from the elevated road, Gadkari will also inaugurate a section of the Rewari–Ateli Mandi National Highway 11, on which around Rs 1,148 crore has been spent.