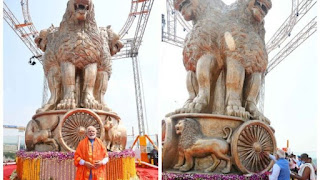 In the first major milestone towards the inauguration of the new Parliament building likely by the end of the year, Prime Minister Narendra Modi on Monday unveiled the national emblem cast on the roof of the new building. Made of bronze with a total weight of 9,500 kg and 6.5 metre in height, the emblem has been installed at the top of the central foyer of the new Parliament building, and a supporting structure of steel weighing around 6,500 kg has been constructed to support it.

Official sources said the concept sketch and process of casting of the national emblem on the roof of the new Parliament building has gone through eight different stages of preparation from clay modelling and computer graphics to bronze casting and polishing. Lok Sabha Speaker Om Birla, Rajya Sabha deputy chairman Harivansh, urban development minister Hardeep Singh Puri and parliamentary affairs minister Pralhad Joshi were present at the ceremony. The PM participated in a puja before unveiling the statue. Modi also interacted with workers involved in the building’s construction and told them that they should feel proud of their work. When a worker expressed joy at his visit to the site and likened it to Lord Ram’s arrival at Shabri’s hut, a reference to epic Ramayana, Modi said light-heartedly, “Wah, wah, this is your hut!”

Over 100 artisans from various parts of India worked on installation. A senior official in the Union ministry of housing and urban affairs said, “There is no other similar depiction of the emblem, from the perspective of material and craftsmanship, anywhere else in India. Over 100 artisans from tirelessly worked on the design, crafting and casting of the emblem for over nine months to bring out the quality that could be seen in the final installation. ” 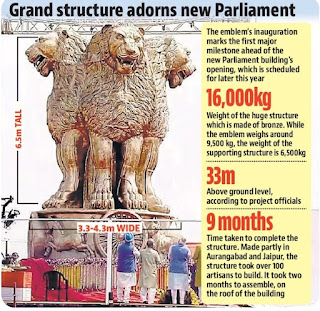