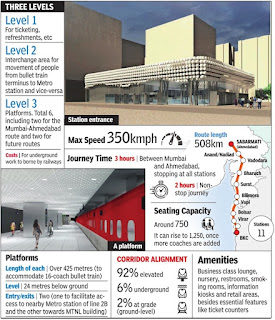 With a change in government in the state, the bullet train project, which lost a couple of years, has gained momentum. The project had stalled because of differences between the Centre and the state after the MVA came to power.

On July 22, the National High-Speed Rail Corporation Ltd invited bids for the design and construction of the BKC terminus, which will be the only underground station on the corridor. The terminus project will include related cut-and-cover work and the creation of a ventilation shaft (also to be used for TBM access).

Land of 4. 2 ha at BKC was allotted by the state in 2018 on the condition that the feasibility of the proposed International Finance and Service Centre should not be compromised. The state insisted the land cost be adjusted against its equity contribution. The NHSRCL has designed the BKC station as an integrated structure (with IFSC above it) to take a load of a 60-metre high building above it. The tender for the station was proposed to be floated in 2018. Later, the plan was changed to increase the height of the IFSC building to 95 metres, which required a change in design.

A week after the state government announced all clearances for the Mumbai-Ahmedabad bullet train project, the National High-Speed Rail Corporation Ltd has floated bids for the design and construction of the corridor’s underground terminus at BKC. The first bids, floated in November 2019, were scrapped by NHSRCL in February since land at BKC had not been handed over by MMRDA. The said land is at present being used for a Covid care centre, but MMRDA has asked BMC to clear the area by September.

An NHSRCL spokesperson said, “The station will have six platforms, with the length of each being approximately 425 metres (sufficient to accommodate a 16-coach bullet train). The station will have connectivity with Metro and roads. ” It will be the only underground station of the corridor and the platform will be 24 metres below ground level.

Besides two platforms for the Ahmedabad route, it will have four platforms that may serve other routes in future. The bid will be opened on October 21 and after completing the process on technical and financial assessment, the contractor may be appointed by early next year soon after which the work will start.