Imports from Russia up 3.5x since start of Ukraine war 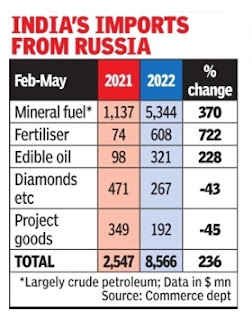 Driven by a sharp spike in crude oil shipments, India’s imports from Russia have shot up 3.7 times to top $5 billion during April and May 2022, with the value of consignments nearly already half the imports for entire 2021-22.

Since February, when Russia attacked Ukraine, imports have risen close to three-and-a-half times to $8.6 billion, compared to $2.5 billion in the corresponding period in 2021. Apart from petroleum, some of the other product categories, such as fertiliser and edible oil, have also seen a significant increase, according to the disaggregated numbers available with the commerce department. Coking coal and steam coal have also seen a steep rise.

Project exports and precious and semi-precious stones, largely diamonds, are among sectors whose imports have shrunk. Soaring imports come in the backdrop of shrinking exports, which has widened the trade deficit during the first two months of 2022-23 to $4.8 billion, compared to $900 million in the corresponding period last year.

With the Uyghur Forced Labour Prevention Act coming into effect in the US last week, Indian textiles exporters have been asked to carry out due diligence and ensure that nothing is either directly or indirectly sourced from China’s Xinjiang Uyghur Autonomous Region, which accounts for a bulk of cotton grown globally.

Barring a dip in February, when the war started, the import of “mineral oil” from Russia has
gone up in every subsequent month, with the value during February-May 2022 pegged at $5.3
billion—a five-fold jump over the corresponding period last year. The numbers indicate that since March, the government has not been shy of allowing imports from Russia despite international pressure, at least in areas where there is a major deficit.
Government sources said that the sanctions by the West have helped India get a better deal from
Russian companies and it is in the country’s economic interest to pursue what’s best for it. In fact, unlike the initial days of the war when Indian petroleum refiners were buying significant
amounts in high seas sales, the numbers indicate that the transactions are taking place directly as
crude oil is exempted from sanctions. As a result, fertilisers have seen an even bigger rise, with the value of shipments soaring over eight times to $608 million since the war began in February. Fertiliser has now emerged as the second biggest item in India’s import basket from Russia, overtaking diamonds and project
imports, during April-May 2022.