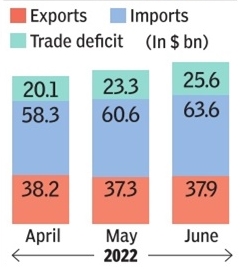 Record imports in June resulted in the trade deficit widening to a new high of $25.6 billion. This took the first quarter gap between imports and exports to a record over $70 billion.

Preliminary data released by the commerce ministry on Monday estimated that imports shot up 51% to an all-time high of $63.6 billion, driven by petroleum, coal and gold.

While exports grew a tad faster than May, rising 16. 6% billion to $38.9 billion, a slowdown in the developed markets has resulted in a contraction in some crucial sectors, such as engineering goods, pharma, yarn & fabrics and plastics, even as high prices drove up shipments of diesel and petrol out of the country. Although electronics and garments grew nearly 50%, non-oil exports rose 5.5% in June. During the quarter, exports are estimated to have expanded around 22% to $117 billion, while imports jumped 47% to $187 billion, resulting in the trade deficit more than doubling.

Government officials acknowledged the impact of the slowdown in markets such as the US but said high imports pointed to continued economic activity. Last week, the finance ministry moved in to discourage the import of gold by raising customs duty, while making export of oil products less attractive.

Economists, however, said the trend will result in the current account deficit widening by a large margin.