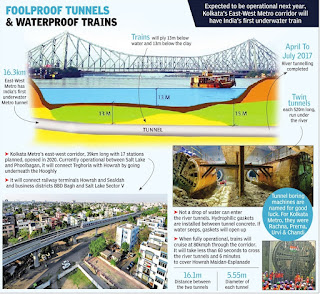 In early 2023, for the first time in India, a train will roll under a river. India’s answer to Eurostar is Kolkata’s futuristic Metro — running along a 16.34km East-West corridor that will finally see the light at the end of the tunnel under the Hooghly, a distributary of the Ganga.

Of the entire length, 10.8km is underground, but the crucial part is a 520-metre underwater tunnel. There will be twin tunnels down the width of the river. This is the East-West Metro’s prime attraction. For commuters, this will be an experience like no other. They will zip through below the water for almost half a kilometre in less than a minute.

The Green Line or Kolkata’s Line 2 currently runs a truncated 6.97 km between Sector V in east Kolkata, and Phoolbagan. But everyone’s waiting with bated breath for that ride when the train will run the full route from Sector V to Howrah, under the Hooghly, in 27 minutes.

Like Eurostar trains between London and Paris that go through the Channel Tunnel, the river tunnels have been built in such a way that you won’t know the river from the land. Construction major Afcons started digging the tunnels in April 2017 and completed them in July that year. “The river tunnels, an engineering marvel, are a first in India and a rare venture worldwide. They were completed in 67 days,” said Satya Narayan Kunwar, the project manager of Afcons that was contracted to build the 3.8km Howrah Maidan terminal-Esplanade section. Much water has flown below the Howrah bridge since the twin tunnels crossed the river and snaked through Kolkata’s congested streets to reach the Mahakaran station (coming up below Laldighi at Dalhousie Square), and burrowed beyond, to Esplanade, from where another set of tunnels headed towards Sealdah, meeting yet another pair from the Salt Lake side. The project faced time and cost overruns. “But all that is behind us now. Residents of both Kolkata and Howrah are set to cruise in a Metro that will have trains chugging out of platforms every two-and-a-half minutes. In India, there are not even roads under a river,” said NC Karmali, the project director of Kolkata Metro Rail Corporation, which is implem enting the Rs 8,575-crore East-West Metro. “After its maiden stint in Kolkata to be a part of India’s first Metro in the 1980s, Afcons returned to the city in 2010 for the East-West Metro project. Once the entire corridor is commissioned with the river tunnels, it will revolutionise underground mass rapid transit in India,” Kunwar said. The hype, right from the railway ministry, which is the majority stakeholder with a 74 % share, down to the ordinary citizen, can be felt in Kolkata.

The bottom of the tunnel is 36m from the water surface and trains will ply 26m below the ground level. Tunnelling below the river was a challenge. The water tightness, waterproofing and designing of the gaskets were major issues because the tunnels had to be constructed for service for up to 120 years. “Not a drop of water can enter the river tunnels. There are hydrophilic gaskets in between the concrete of the tunnels. If water comes inside the tunnels, the gaskets will open up,” said an engineer.

The material used protects it during quakes in seismic zone 3, in which Kolkata falls. Afcons deployed a highly experienced tunnel crew in case an entry was needed into the cutting chamber of the tunnel boring machine. In the remote possibility of water ingress, the TBMs would shut down like a submarine for safe evacuation. It took a lot of grit during execution. Unlike conventional tunnelling, river tunnelling cannot stop once it starts. “Stoppages would lead to ground loss, leakages and various other problems. So a robust plan, like 24x7 crew deployment, was in place. The TBM’s cutter-head interventions were done just before plunging under the river so that no intervention was needed once it started,” Kunwar said.

The TBMs were equipped with leakage arresting mechanisms and could dig through poor soil conditions. The alignment was designed in such a way that the tunnel below the river passed through comparatively competent geology. So the tunnels had to go deeper below the riverbed. “Strong river tunnelling protocol was followed. The TBMs were constantly supervised so that there were no functional issues,” Kunwar said.

To match river depth and the tunnel’s gradient, Afcons had to construct India’s deepest Metro station — 30m below Howrah railway station and the deepest ventilation shaft, at 43.5m underground. The shaft will also be used for evacuation.

It has been built with innovative engineering techniques to navigate geological challenges and overcome any impact on the Circular Railway line that runs along the riverbank. The river tunnels and the ventilation shaft near the bank are a stone’s throw from the Howrah Bridge, another engineering marvel built in the last century to connect Kolkata and Howrah, its twin.

Built 79 years ago, the bridge is 1,500-foot-long between its two towers. Commissioned in 1943, it continues to carry 1.15 lakh vehicles on weekdays. “Once the East-West Metro link connects Kolkata and Howrah, it should cater to a million commuters by 2035,” a KMRC official said.