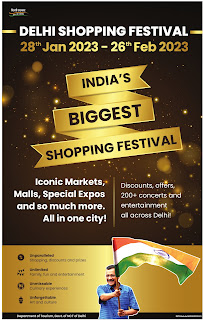 February next year may see shopping enthusiasts congregating in the city from across the country and even abroad seeking the best bargains on a range of products while enjoying culinary and cultural delights Chief minister Arvind Kejriwal announced on Wednesday that the capital would host a month-long Delhi Shopping Festival from January 28 to February 26 in 2023. It will be India’s first extravaganza of its kind on the lines of shopping events organised in Dubai, Singapore, Hongkong and Cannes, France Addressing a digital press conference, Kejriwal said the festival would mark Delhi’s standing at the international level and hope to see it become the biggest shopping festival in the world within a few years. The festival, the CM said, would encapsulate Delhi’s culture, traditions and hospitality. “It will be a marquee event with world-class arrangements and people across the country and the world will be invited to the festival,” said Kejriwal. “Delhiites should gear up to host the shopping festival and people living outside should start booking their tickets immediately. The CM added that the shopping event would bring together Delhi’s citizens, corporates, retailers, traders and the government to work as partners and give a massive boost to the city’s economy, along the
way creating thousands of jobs. The shopping festival had been mentioned in the Rozgar Budget earlier this year. The government aims at generating 1.2 lakh jobs through the festival in five years. To incentivise traders to participate in the event and offer heavy discounts to shoppers, Delhi government has already announced a rebate in GST. The responsibility of organising the festival has been given to the tourism department and Delhi Tourism and Transportation Development Corporation.
The month-long event will see the markets, shops and malls getting a facelift and products available at unmatched discounts. “There will be something there for people from every strata of society,” the CM said. According to Kejriwal, Delhi will be divided into five zones — east, west, north, south and central — to host different components of the shopping festival. On the basis of their USP, brand awareness, genre, number of shops, footfall, connectivity and cleanliness, the government will further narrow down 15 iconic markets and 10 malls across all zones for hosting the festival. In the second year of the festival, the government will also include the neighbourhood markets in the shopping festivals. There will be five curated expos organised in the five zones on spirituality and wellness, art and literature with a focus on languishing art, gaming & technology, children’s special and environment & sustainability, the CM announced.
To keep the entertainment quotient high, the state government also plans to invite musicians, film
personalities and stand-up comedians and dance groups to participate in around 200 entertainment
programmes during the festive month. For the foodies, there will be a showcasing of cuisines from
all parts of the country. “We are holding talks with hotels, travel agents and airlines to provide
comfortable travel and lodging arrangements for people travelling from outside to Delhi. We are
deliberating with them to offer special packages to tourists from other Indian cities and even abroad.
People living outside Delhi should start booking their tickets immediately,” Kejriwal said.
The festival will ensure the families remain engaged with game stalls and prizes. There will be face
painting, magic shows, art competition, college bands, international cultural troupes, celebrity talks,
light and sound shows, among other leisure activities. To make it easier for women and elderly to
move around, the government will also provide free transport, golf-carts in the marketplaces,
dedicated lanes and reserved seating.