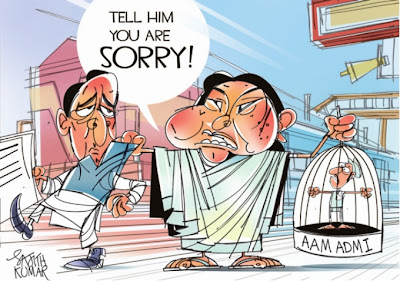 Railway minister Dinesh Trivedi appeared to be on the brink of losing his job within hours of presenting a budget that was hailed by the Congress as “forward looking” but savaged by his own party, Trinamool Congress, as “antipeople” for proposing an across-the-board passenger fare hike. In swift retaliation to the defiance of Mamata Banerjee’s direction to not raise fares, the Bengal chief minister sent a faxed letter to PM Manmohan Singh asking him to sack Trivedi and replace him with her loyalist Mukul Roy. There were indications that the Congress will have to grudgingly agree to Mamata’s demand for fear of offending an ally whose 19 MPs in the Lok Sabha are crucial for the government’s survival. The scenario kept changing through the day. Initially, after the Congress and PM supported the budget, it appeared that the UPA was willing to risk Mamata’s wrath. The surmise was that it had stitched up support from elsewhere — SP, BSP, or both — and was no longer averse to losing a restive and demanding ally. However, late at night it seemed the Congress, too, had been taken by surprise by Trivedi’s “bold” budget. Pranab Mukherjee called up Mamata to request her to not insist on Roy’s induction until he presents the Union Budget on Friday. Mamata is learnt to have agreed on the condition that Roy would be the one to announce a full rollback. Trivedi’s resignation appears imminent. The Congress core group had a late-night meeting in which party leaders have considered several scenarios, including the possibility of requesting Mamata to put off her demand to replace Trivedi with Roy until March 31 when the Parliament’s budget session goes into recess. It now looks certain that the TMC plans to force a fare rollback with a delegation of party MPs seeking time from the PM on Thursday. The dramatic developments which dwarfed Trivedi’s maiden rail budget, are likely to also strengthen the Congress’s efforts to rustle up alternative numbers to deal with Trinamool’s brinkmanship. The sub-text of Trivedi’s imminent ouster is Mamata’s growing suspicion that he had moved too close to the Congress, and his budget is seen by her as evidence of that.