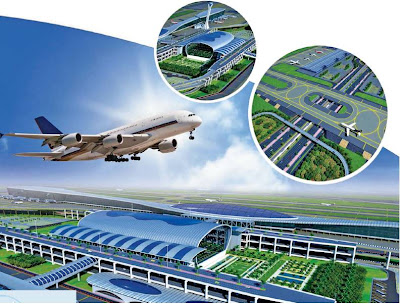 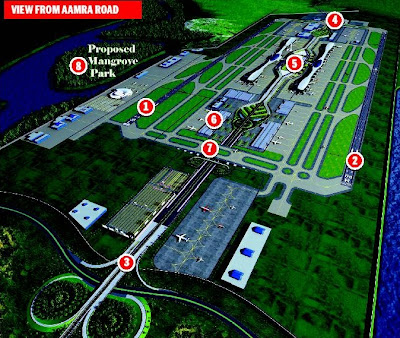 1 LEFT RUNWAY: 3,700 m long, 60 m wide runway with an end safety area of 240 m x 120 m and approach lighting of 900 m
2 RIGHT RUNWAY: 1550 m from the Left Runway for independent air traffic movements
3 AAMRA ROAD: Western access point to the airport. The road will be widened into a-lane
4 NATIONAL HIGHWAY 4B: Western access point to the airport near Panvel. Apart from the road network including BRTS, the airport will also be accessible from the existing Mankhurd-Belapur-Panvel commuter rail corridor from Khandeshwar Rly Stn, the metro rail, and even via hovercraft service
5 MAIN TERMINAL: The terminal will be built in the middle of both runways and will have full and complete access from either side. The acess roads (from Aamra Rd and NH4B) will provide beautiful view of the tarmac. It has been designed to support up to 60 million passengers P.A. once fully functional. Main passenger processing facility has five levels, including two mezzanines for both international and domestic passengers.
Key features:
Total Area: 5,23,000 sq. m.
Number of Contact Aircraft Positions: 81
Number of Remote Aircraft Positions: 29
350 plus check-in counters
6 CARGO: The airport will have a state-of-the art facilities for bulk cargo loading and un-loading.
7 TAXIWAY: Full-length parallel taxiways connected by bridges running over the access roads from the West and the East.
8 MANGROVE PARK: A 245 Ha Mangrove Park to be developed on Waghivali Island

The new Navi Mumbai International Airport will have a stunning ten-lane approach road to its terminal building flanked by its two runways. The first artist’s impressions and plans of the proposed airport released reveal a glassfacade terminal building located right in the middle of the airport with the runways to its north and south and the approach road running right through it. For Mumbaikars, embarrassed by the shabby, shanty-lined roads leading to CSIA airport, it’s going to be a sight for sore eyes. According to City and Industrial Development Corporation advisor V K Kalra, the approach road will offer breathtaking views of the airport on both sides. The tendering process for the airport located at Panvel will start soon and the deadline for the completion of its first phase is 2016. While as per the International Civil Aviation Organisation codes, the distance between the two runways should be 1090 metres, in Navi Mumbai airport’s case it will be 1550 metres. The airport will be able to host new-generation aircraft like A-380s. The two runways will be connected by a flyover with the approach road passing underneath. The terminal building will sprawl over 5,23,000 sq metres. "In phase-1, we will be build the first terminal and simultaneously start diversion of the river Ulwe,'' said Kalra, who was previously Airport Authority of India executive director incharge of Mumbai and Delhi airport makeovers. The two terminal buildings will have 350 check-in counters. The main terminal building will have five levels, including two mezzanine floors. The airport will have a total area of 1160 hectares. The cargo complex will get around 2,01,581 sq metres, while fuelling enclave will get 1,51,000 sq metres. Over 276 hectare land has been earmarked for non-aeronautical activities like hotels and commercial plazas. The airport will have parking slots for 5500 cars, 3500 bikes, 120 buses and 10 cargo trucks. There will be three curbs each on the north and south sides. The level one curb will be dedicated to commercial vehicles, the second will be for arrivals and the third for departures. Level one of the terminal will have baggage sorting area, commercial ground transportation curb access lobby, commercial ground transportation curb, metro train station and vehicular parking. The level two (mezzanine) will have explosive detection baggage screening areas, bridge connections to parking areas and metro train station and offices. The level three will have baggage claims, greeters' areas and public arrival curbs. The level three will be for arrivals. The level four (mezzanine) will have departure passenger access to concourse, arrival passenger access from concourse to claim areas and bridge connection to parking areas. The level five will have passenger check-in lobby. The new airport will cater to 10 million passengers per annum in the first phase and 60 million once it goes full stream in 2030. The total project cost Rs 14,573 crore. CIDCO officials said that the National Highway 4B will provide the main road access to the airport from the east, whereas the Aamra Marg will be entry from the west. On Thursday, Chief Minister Prithviraj Chavan signed a viability gap funding for the Sewree-Nhava Trans-harbour Link. The THL will connect the proposed airport with the island city of Mumbai. The Rs 8,800 crore project is being executed by the Mumbai Metropolitan Region Development Authority and the state is expecting at least Rs 1,760 crore from the Centre for it. The MMRDA will call for tenders in a week's time for the project.
KEY FEATURES
A 'Greenfield' Airport (1,160Ha area) with an ultimate capacity to cater 60 MPPA. This makes it the largest of its kind in the country.
To accommodate new large aircrafts like A-380, B747-8
Three hangars for aircraft maintenance
Visual Landing Aids: PAPI, CAT-I Instrument Landing System with provision for upgrading to CAT-II
2 MPPA capacity low cost carrier terminal
Online check-in, integrated baggage handling system and 13,290 sq. m baggage claim area